Skin bacteria that protect us?

The flu season is here and I hear that we should wash our hands as much as possible to help prevent spread of flu viruses. My skin is already irritated and I am afraid to make things worse. Do we need to have skin with no bacteria or viruses or are some of the bacteria good for us?

We’ve all heard about good digestive bacteria . Some of us actively try to manage our intestinal flora with a variety of supplements. Why would our skin be any different?

Is it possible that skin bacteria are good for us? In fact, there is more and more evidence that human skin bacteria are necessary for life and may be required for optimal skin and body functioning. In the next few paragraphs, I will discuss recent discoveries about our need to keep good skin bacteria happy.

People associate bacteria with four D’s: dirt, disease, death and decay. This may be true, but I think it’s time to improve bacterial public relations image, as we would not be able to live without them. 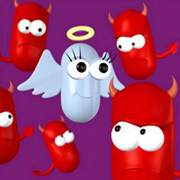 Humans are a walking sophisticated ecosystem. There are greater than 10 times as many microbial organisms living on us and in us than our own cells. Recent studies have identified more kinds of different bacteria living on our skin than previously thought. Although only few patients were tested, the researchers found more than 240 distinct species of bacteria living on the skin of healthy volunteers. Germophobes should not panic. These bacteria interact with our skin and are involved in wound healing and inflammation. A great majority of these bacteria are harmless to us under normal circumstances and, in fact, are necessary for our healthy living.

Here are some facts about skin bacteria: